We sat down with Martin Walters, Marketing Director at TOMRA Collection Solutions, to find out about TOMRA’s Reverse Vending Machine technology and what it’s like working at a purpose-driven company that has truly changed the way we look at recycling.

Since the introduction of the NSW Government scheme in NSW in December 2017, and their role in the Network Operator JV TOMRA Cleanaway, TOMRA has now expanded its operations into QLD, NT and WA. They also introduced Australia’s first recycling app – the myTOMRA app - to make the process even quicker and easier for customers to recycle their cans and bottles.

Martin shares with us some of the huge successes of Australia’s Container Deposit Schemes and their Reverse Vending Machines that form the backbone of the schemes in NSW, QLD, WA and NT, one of their standout marketing campaigns (which raised over $500,000!), his proudest moments working at TOMRA, and some of his tips for marketers just starting out in the industry. You’ll also find out some of the exciting things we can expect from TOMRA in 2021 and beyond.

Congratulations on the success of TOMRA and the technology provided for the ‘Return and Earn’ Reverse Vending Machines – what are some cool facts we may not know about the scheme?

We’ve had over 5.4 billion containers returned through Return and Earn in NSW since the scheme started three years ago in December 2017. That’s the equivalent of around 5-6 million containers being returned to the central Cleanaway container processing facility for NSW at Eastern Creek EVERY DAY, 363 days a year (we close two days a year - on Christmas Day and Good Friday). And virtually every one of those bottles and cans will get recycled, most of them back into bottles and cans again!

From a TOMRA Global perspective - the fact that 75% of the world’s French fries are sorted, peeled and processed by TOMRA – through our TOMRA Food Sorting division!

Do you feel the Australian consumer has become more environmentally aware?

It’s hard to find figures to physically quantify it – but yes, I definitely think they have – and much more aware that what we do with our waste really matters. It’s not good enough anymore to just put it into the general waste bin – or worse still, drop litter that finds its way into our rivers, streets and oceans. As Tim Silverwood from Take 3 for the Sea says – the Ocean is downhill from everywhere! And we’ve seen this change reflected in the way people have embraced the container deposit schemes in all of the states we now operate in – NSW, QLD, WA and NT.

Has COVID19 had much of an impact on the program in NSW?

Initially, we saw people hold back and hold on to their containers as they adjusted to the restrictions on movement however as restrictions eased, we saw people return regularly once again. Our agility as an organisation in introducing all the necessary social distancing steps as well as the introduction of “touch-free recycling” also gave people the confidence to continue recycling through the schemes while continuing to adhere to social distancing and other government guidelines.

The other reason why COVID has not impacted us too much, and in some cases even increased recycling rates, is that when times are tough, people need every dollar they can get. So, the desire to recycle their containers through one of our Reverse Vending Machines across Australia increases.

We currently see two out of every three containers supplied in NSW redeemed through the scheme which is a fantastic and encouraging result. But we’re always looking for new ways to encourage people to recycle through Return and Earn in NSW, Containers for Change in WA and QLD and Container Deposit Scheme in NT. As more and more people recognise the positive environmental outcomes that container deposit schemes bring, we anticipate that records will continue to be broken in the future – especially during the peak summer period.

Is it true TOMRA are looking to have these in schools to help educate the next generation?

At this stage, there are no plans to physically locate any Reverse Vending Machines within school grounds – due mainly to the many logistical and safety challenges in doing that.  But we are actively involved with an organisation called Eco Educate in educating school children about the critical importance of using the world’s resources in more efficient ways, and the importance of reducing, reusing and recycling not just drink containers, but all containers and packaging.

We’ve also just appointed our first two TOMRA EcoPreneurs - a program that recognises inspiring young people who are helping others and helping the environment by collecting containers, recycling them and donating the funds they raise to help others in their community.  Like 10c Tom on the Gold Coast where TOMRA has provided him with additional 10c Tom branded Wheelie Bins and given him a part-time job at our TOMRA Recycling Centre at Varsity Lakes.

We’ve recently introduced six new indoor air-conditioned Return and Earn reverse vending centres in Western Sydney and we plan to roll out more of those in 2021 as they’re proving to be a big hit with NSW recyclers.

We’ve also just launched a new behind the scenes video, The Journey of a Bottle presented by Tim Silverwood that shows people exactly what happens to their empty bottle when they return it to one of our Reverse Vending Machines – and how it becomes a new bottle again.

It must feel good working for a brand that’s doing good… what Corporate Social Responsibility campaign has had the greatest success? And why do you think that was?

Definitely our Bottles for the Bush Charity Appeal in 2019-2020, where we raised over $500,000 for Rural Aid, to help Aussies devastated by drought and bushfires. That’s the equivalent of roughly 100,000 people giving up their 10c refund and donating over five million empty cans and bottles to help farmers and rural communities over the summer period. In so doing we increased the existing charity donation rate by over 500%.

The reason I think it was so successful, was a combination of timing, and the fact that Aussies have a strong connection with the land and with our rural and regional communities, even if they now live in the city. The bushfire and the drought were brought into our lounge rooms every night by the media and people’s hearts went out to those affected.

What has been your proudest moment during your time at TOMRA?

My proudest Marketing moment was definitely the Bottles for the Bush Charity Appeal campaign where we raised more than $500,000 for Rural Aid.

Seeing the campaign really take off and seeing the charity donation rate through our machines skyrocket and then to see it just keep on going so well, week after week. Our original target was $250,000 and we smashed that after just six weeks I think – so we doubled it to $500,00 and even beat that. I then had the privilege of going out with one of the Rural Aid water trucks to a property out near Forbes who were desperate for water in their tanks to feed their dehydrated sheep – and it was very moving to see the direct impact that all of those container donations were making to people’s lives.

But my proudest business moment was probably simultaneously launching the 10 x new large-format depots – called TOMRA Recycling Centres in QLD when their Container Deposit scheme launched in November 2018. They were the first of their kind for TOMRA in the world on a scale we hadn’t attempted before, and we only had a few weeks to build them and fit them out. So it was a mammoth team effort and they launched to great success from day one. Currently, around 20% of all QLD containers are returned through those 10 sites.

You’ve had an impressive career working both client-side and agency roles across a range of top Australian brands and industries. What are your top 2 career tips for young marketers just starting out?

1.  Always embrace creativity and innovation, wherever it comes from – even if it’s not from you.  Remember that “a good idea doesn’t care who has it!”.

2.  In a world of data and metrics – trust your gut. Connect with your consumer’s needs and desires. And remember that ALL buying decisions are emotional.

For more information on the Return and Earn scheme visit www.ReturnandEarn.org.au

To find out about the other ways TOMRA help to reduce and reuse waste, head to mytomra.com.au and follow TOMRA on Facebook for regular updates.

You can download the free myTOMRA app to find your closest Reverse Vending Machine and to receive your recycling funds digitally via PayPal, E-voucher or directly into your bank account (New South Wales only). 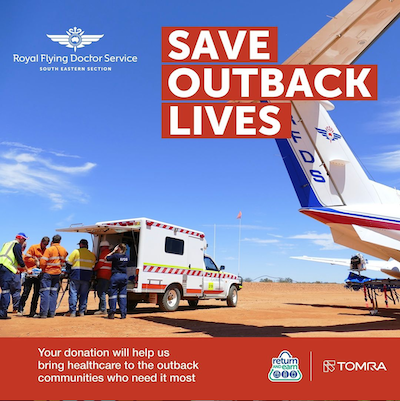 Martin's interview is part of our new 'Spotlight on...' series where we'll be sitting down with clients and candidates who are some of Sydney's best marketing talent to find out what exciting projects they're working on, career advice they'd like to share, what it's like to work at their business or agency, and much more!

We'd love your feedback, if you have any comments, suggestions, or questions you'd like answered, reach out to Brooke -  brooke@iknowho.com.au